Why organic is probably better for you even if it's not healthier for you... 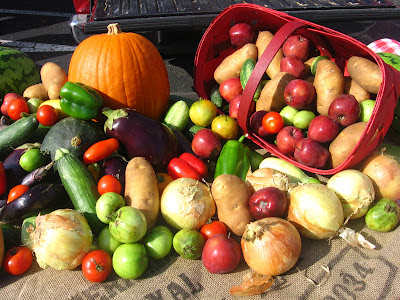 I was gearing up for the DNC the past few weeks and so I was a tad blindsided by the meta-study on organics versus conventional produce that came out recently. After reviewing a large body of research on the topic, the study concluded that the nutrient and anti-oxidant value of conventional produce and organic produce is the same, which supposedly counters the argument from supporters that organic food is "healthier." I heard the tail end of the report on NPR just as I was getting ready for day two of the convention. I was down there Monday through Wednesday representing Friendship Gardens, the project I work on, as one of Mayor Foxx's legacies. The idea, if you'll allow me this brief detour, was that the mayor and the Charlotte in 2012 host committee for the DNC (a bipartisan group) decided to highlight several areas in which they hoped the convention would leave a lasting legacy.  They wanted to highlight the good work already being done by community and non-profit groups, as well as for-profits and schools. They also wanted this to be a stimulus for those honored as legacies to continue their good work. We were honored for two projects in the areas of Healthy Children, Healthy Families. If you follow the link and watch the video (or this one, or this one) you can learn a little more about this program. The relevant point for the purposes of this post is that I had a moment of dread that by representing an organization that promoted sustainable community gardening, I'd be asked about the report on the relative health of conventional versus organic produce instead of about the work we do to increase access to fresh produce. 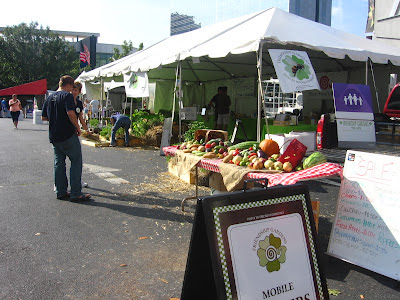 It turned out that we were asked about the NPR report, but in addition to questions about our work. Still, I feel like I didn't really get a chance to collect or share my thoughts, so here goes...

Michael Pollan already answered for me! That was fast. Pollan says that this is old news, and it is. He also says, basically, "so what" if conventional and organic produce have the same nutrient levels. The health implications of organic versus conventional goes beyond nutrient content. He also talks about soil and public health and pesticides, so what I have to say isn't all that different, but here goes....

Organic farming is better for you because:

1. Fewer pesticides means fewer health complications. I'm going to echo Pollan's concern that the allowable limits of pesticides in our food (an EPA regulation) does not necessarily mean that it's safe. I agree with him that we don't have enough data. While the US policy errs on the side of allowing higher limits, the Europeans follow the precautionary principle, erring on the side of caution until we have clearer data about the impact of pesticides. To me this is as much about the impact of pesticide application on farmworker health as it is on pesticide residue on food. Since, like many others, I can't be organic 100% of the time, I rely on the Environmental Working Group's Dirty Dozen and Clean Fifteen lists to help me choose.

2. The soils are better. That's also one of the reasons why organic produce is more expensive. The organic farmer has to bring soils into balance because s/he cannot rely on chemical pesticides and herbicides. The organic farmer needs strong, healthy plants that are naturally resistant to competition. Over time the organic farmer's soil becomes more nutrient rich, less prone to erosion, and so on.  The conventional farmer's soil will require more and more inputs and may suffer from erosion or become like a hardpan soil, impenetrable to water. What does soil health have to do with my health and your health? If the soil lacks the nutrients, the food it produces will also lack those nutrients. Depleted, eroded soil is going to give you less of the good stuff. Robust, nutrient-dense soils are going to give you more of the good stuff.  It's that simple. It's better food with less artificial inputs and better environmental outcomes.

3. Organic is often smaller industry, and makes up a good portion of the local food movement...which is good for local economies.  I know that it doesn't make sense to buy everything locally. Local bananas would be ridiculously expensive to produce, but do I really need a banana everyday, especially during peach or apple season? What is good for local economies is investing what we can in local businesses.  The NC 10% Campaign is a challenge to local citizens to spend just 10% of their food budget ($1.05 daily) locally. Money spent on local producers (and service providers) will turn over 7 times as those business are able to hire employees and spend money with other local businesses.

4. "Healthy" is more complicated than cutting up an apple and measuring levels of nutrients and/or pesticides. It's not just the apple itself, but how it's grown (and who grows it), how it's handled and transported, and how it's purchased, all of which I've already touched on. Healthy is also about accessibility and availability of that apple. It doesn't much matter which apple has higher nutrient content if people can't buy it. There are often economic, social, and even cultural reasons why fresh produce doesn't have a larger role in people's diets. I've been growing a little bit of my own produce since 1997, when I started with herbs and lettuce on a balcony. I find gardening therapeutic and it was one of the ways for me to increase my consumption of organic veggies without increasing the amount of money I spent on food. I've met wonderful friends through gardening and now I have a job where part of my responsibility is teaching others to garden. The health implications and benefits of growing a garden go well beyond having organic produce, as I've written about before.

"Healthy" is the whole package. It's production that doesn't strip the environment of its natural ability to heal itself. It's production techniques that protect workers from ANY level of danger. It's using fewer fossil fuels to produce, transport, and store our food. It's about fruits and veggies that are fresh and help us consume the right nutrients. It's about having access to fresh fruits and veggies. It's about being part of a society and a culture that place a high value on people's health and livelihoods so that we are always working towards the highest good, rather than towards maximum allowable limits.
Posted by Katherine at 2:11 PM