Lessons from the bee hive, part one

The honey harvest is behind us and I attempted to split a new hive from our very robust hive, but I opted to do the split “naturally” with a “walk away split,” which had a risk of the bees dying. After the trauma of losing a hive in the spring, it might seem curious that I would make this choice. Over the last few months, I have returned over and over to my bee mentor’s remark that “bees are efficient.” I knew that if I gave them what they needed, they would make a queen and the young hive would start doing its work with determined efficiency. I did everything I knew how to do, asked for the advice I needed, and left them alone. Well, they died. This time I didn’t cry. I just checked the hive to see what lessons I could learn for next spring, when I’ll try again. I’m also finally processing the lessons from my dead hive.

So, what lessons on sustainability have I learned from my dead bees?

Bees are horders. If they weren’t horders, we couldn’t rob honey from them without destroying the hive. While it would be really easy to start out by saying something like “hording is bad for you” it would be incorrect and overly simplistic. In reality, hording is actually necessary for the bees’ survival, and taking a moment to understand this helps me think about sustainability in a different way.

Bees do not horde because they are greedy or because someone didn’t love them enough when they were children. Bees horde because they are 100% dedicated to the survival of the hive. Most of the bees that make the honey that gets the hive through the winter will be long gone before winter ever comes. Their survival instinct is based on cooperation and leaving more food in the hive after their death than when they were born. Humans like to talk about competition as our survival instinct, but there’s more and more evidence to suggest that cooperation is just as important to our evolution and survival. That humans are both selfish and cooperative probably doesn’t come as a surprise to anyone who has survived to adulthood, but when we cooperate is it for the health and survival of society? Or is cooperation, as some studies suggest, also motived by self-interest? Bees are interested in the survival of the colony (hive)—that’s why you are more likely to get stung if you are near the hive. If a bee is relatively sure that she will make it back to the hive with nectar and pollen, she’s not going to play kamikaze (honeybees die when the sting you). When you cooperate is it for something bigger than yourself? 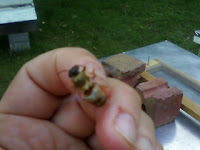 Bees are efficient. Maybe a little too efficient. I love to read about bee communication. The direction of their dance means something, the pattern and speed at which they move means something else. Elegant and precise. That kind of elegant precision is what killed my bees as they circled around to empty cells. There’s not a lot of room change their process.

Agriculture is an excellent parallel in human society that illustrates how efficiency can backfire. As we have become more efficient at food production through industrialized agriculture, we have reaped the culinary and other social benefits. Unless you want to return to foraging, you can’t really argue that at its core agriculture is bad. Loss of topsoil, superbugs, and the health impacts of industrialized agriculture are all signs that efficiency has its limits. Some would argue that we just have to get more creative, usually implying a technological fix. What they don’t understand is that agriculture is technology. Starting with simple stone tools and digging sticks all the way up through Monsanto and GPS-enabled tractors, it’s technology. All of it was designed to make us more efficient. Inefficiency probably isn’t a solution, either. How can we marry efficiency with other values that are inclusive of more than just our physical survival?

Continued in part two…more thoughts and lessons. But don’t expect answers to these questions.
Posted by Katherine at 2:47 PM