Just another day in the garden 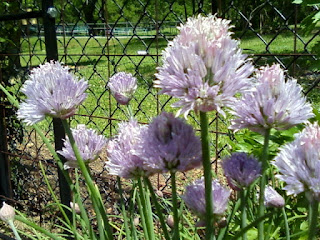 I'm going to hold off on waxing philosophical about bees for today, but watch for an inspired post over the weekend.

Instead I want to talk about "my" garden. I have some small beds in the back yard, but I also garden at Little Sugar Creek Community Garden.  It's not your typical community garden--no individual plots--it's really more of a communal garden. Most days I would call it an ugly, but functional garden.

It's communal and, while most of us gardeners don't live in the neighborhood, we are open to sharing with the neighbors. Most of the produce actually goes to Friendship Trays, a local meals-on-wheels program through the Friendship Gardens program and we plant additional plots outside the fence--"who-so-ever plots" as my friend Nadine likes to call them--so that neighbors who don't participate in the gardening might still enjoy some of the produce. It's a really strange set up, but I like it. The garden is part of a county program on reducing residential waste through composting, so we get lots of students and volunteers in the garden. Our core group has about 5 people and each year we get another 5-10 dedicated volunteers from spring to fall. I get most of my tomatoes for canning from this garden, but I like being out here because I like the service opportunity, too. 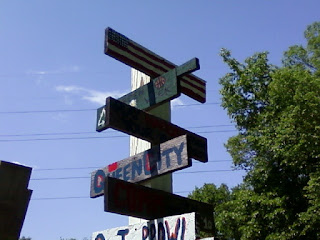 I love working with student groups, like the college students from Johnson and Wales University who do service learning projects on waste reduction or the 2nd graders from Trinity Episcopal School who are working on their Junior Master Composter certificates. Most of all, I love it when a child drags a parent over to the garden to see what we're doing. Some of the parents join us on a Saturday in exchange for some tomatoes and zucchini, but that's not what gets me excited.  When a child asks "what's that?" and I say "A carrot" and he or she replies "A carrot?! That doesn't look like a carrot"--that's when the magic happens!  The conversation becomes an opportunity to teach children about where their food comes from and its surprising how much they know and can figure out if you give them a moment to work it out on their own.


The other really cool thing about the garden is our location.  We're in a transitional neighborhood right at the head of the Little Sugar Creek Greenway, a trail that runs through the city.  Our end of the trail is virtually forgotten when the media talks about the greenway, but in the three years I've been gardening here I've seen more and more cyclists and dog walkers. While we still have some vandalism and theft in the garden and there's almost always an empty 40 tossed along the fence, the space around the outside of the garden is starting to become a place for people to hang out and enjoy the outdoors. Last month I was serenaded by a not-quite-ready-for-prime-time saxophonist. Today, I was chillin' to the clickity-clack of an old school typewriter. He was typing letters to give them that "personal touch." I played tug of war with his dog over the lid to one of our compost machines. 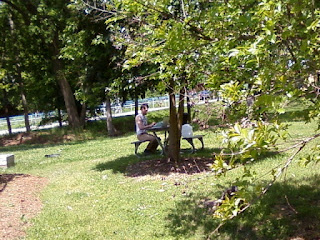 Last fall we moved the picnic table outside the fence so that it was shaded and our fear has been that it would find its way to a new home. It's still there and people are using it to enjoy our little corner of the greenway. My favorite use of the greenway, though, is blue-collar men-with-trucks phenomenon.  It started with guys from Parks and Rec who would park on the street next to the garden to enjoy their lunch hours or their breaks. Today we had a AAA tow truck driver taking a nap.  It's shady, pretty, and quiet (except when the saxophonist is out) so I guess I can see the appeal. Sometimes they come over to ask gardening questions, but most of the time they just sleep.

Most days when I arrive at the garden, I'm overwhelmed by the weeds and the maintenance it requires of our small core team, but days like today remind me that the community we build around our garden is limited only by our understanding of what community is. Successful gardens typically have much more structure than ours, but we are feeding ourselves and our neighbors, so I think we're doing okay in terms of production. We're also doing a lot of great education in formal workshops and in conversations among neighbors. We're a little messy, definitely artsy, and a total experiment. Not every garden can be the quirky little garden at the end of the trail and I'm glad that we can feed people's spirits as well as their bellies. 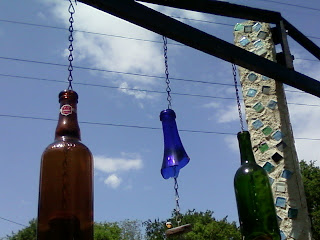 Posted by Katherine at 4:05 PM